Other Common Links For Nachandupatti 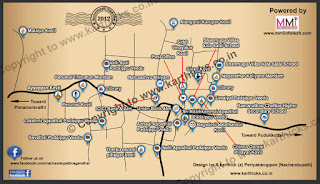 Some deatils about our Native place Nachandupatti<---Nachandupatti History--->It's original name was THIRUMALAI SAM UTHIRAMA fort was being built at THIRUMAYAM for the residence of OOMAITHURAI (younger brother of KATTABOMAN). Good quality LIME MORTAR (called SANDHU in Tamil) was prepared from this Village. Hence this place was also called as NAR-CHANDU-PATTI'.It's name got changed over a period of time as NATCHANDUPATTI.<---Nachandupatti General Information--->Natchandupatti is in Pudukottai District It is located 69 km from Tiruchirapalli, 17 km from Pudukottai en-route to Ponnamaravathy. This small village is dotted with Nagarathar Houses built about 100 to 200 years ago, which are renowned for their architectural simplicity.It covers an area of 3.6 sq.km, with a population of above 3400 people.It's pin code number is 622404.This place has almost all the infrastructure required for modern day living.There is a `ICICI bank'.This also has a locker division and an ATM. Also there is ATM of the Union Bank of India.It has Post Office too. There is a very famous Higher Secondary school named `Ramanathan Chettiar Higher Secondary School'.Also there is an Elementary school called 'Sri Shanmuga Vilasa Kalasalai', One Public library in this place & Internet-Browsing Center.There is a Sunday market (Sandhai) that occurs ever week near sivan kovil urani and it provides you with everything.Cab-Service is also available here round the clock.This place is well-connected by Bus to nearby towns Pudukottai and Ponnamaravathy. We can also directly board bus to Chennai from here !!!There are many famous temples in and around Nachandupatti. There are 3 water tanks available in this place with rain-water harvesting facility. 2 of these are for general use and 1 is exclusively for drinking purposes. There are also so many hotels in this village which are open as late as 12:00 in the night !!! The most surprising thing to me is that there was a cinema theatre in this village couple of years back !!! <---Temples in Nachandupatti--->During the Pallava regime, they carved temples within hills/ mountains. One such Siva temple found in Natchandupatti is MALAYAKOVIL.The name of the Lord over here is`MALAYALINGASVVAMY'.Later a temple for Lord Muruga was built up by Nagarathars a top the mountain temple.Lord Vairavar located here is considered to be very powerful.Thai Poosam is a famous festival in this temple. During Thai Poosam people perform Annadhanam.Also we can see Kavadi by devotees, Thotti-Kattudhal for new born babies etc.,There is a total of - 720 Pullis in Natchandupatti covering people from 5 Nagara Kovils (Pillayarpatti,Vairavan Kovil , Elayathangudi, Ilupakudi, and Mathur). Out of these more than 650 Pullis are residing out of this place.<---Nagarathar in Nachandupatti--->To take care of Elderly Nagarathar People who are staying in this place, an innovative food-scheme "Nagarathar Nala Maiyam" was started by some kind hearted Nagarathars from Nachandupatti. This scheme is the first of its kind in Chettinad villages and now has been embraced in many other Chettinad villages too. The scheme takes care of the elderly Nagarathar needs who are staying in the village.In this scheme, door-delivery of food is done 3 times a day for the elderly people for a very nominal fee of Rs 1000 per month.In addition they conduct free medical check up every month for these elders.Additional expenses that are required to run the above scheme are shared by good hearted Nagarathars from Natchandupatti. To safeguard the valuables of Nagarathars, a Nagarathar locker division has been established by our Nagarathars. 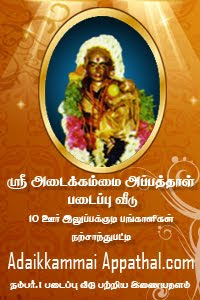